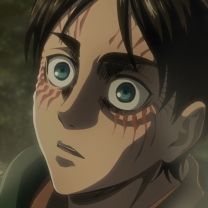 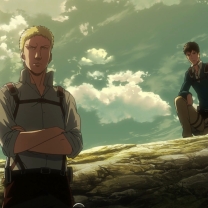 A stare-down in the tree tops yields very little information as Eren’s rescuers close in.

For the amount of questions we (and Eren) had going in to this meeting in the tree tops, not many things are answered for either party. With both Eren and Ymir temporarily out of commission, Reiner and Bertholdt can pretty much just stand there and wait until night. To be fair, what purpose would it serve to tell their captives anything about them or where they come from? Ymir lets loose about the giant monkey beast titan before being convinced to keep it to herself, and Eren plays the role of clueless anger-ball to the same level of mastery as always. 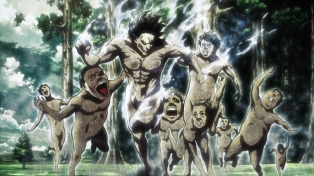 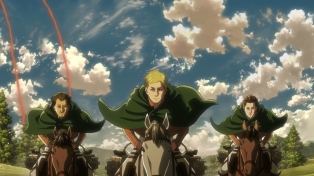 Erwin to the rescue.

Don’t get too far ahead. 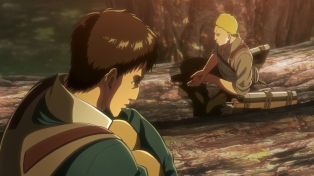 This is a weird episode for Reiner. He momentarily believes that he’s just another soldier fighting for the safety of the wall and everyone gives him the most confused looks they can muster. It’s a clear attempt at humanizing Reiner and his plight of being a mass-murderer that still cares for the friends he has made over the past few years. Fortunately we have the blockhead that is Eren to just turn the knife in the wound that is Reiner’s emotional state. He does come to eventually and admits that he is a crazy murderer, but that messes with even the most hardened warriors. 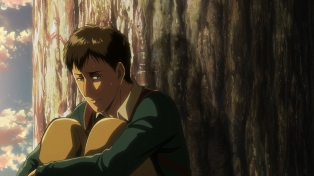 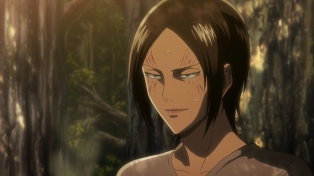 TFW your enemy loses their marbles. 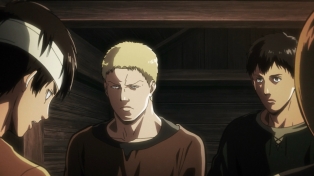 The other big part of the discussion in the trees is that we still don’t really know much about Ymir – and neither do Reiner and Bertholdt from the looks of it. What we’ve seen in flashbacks includes the two’s friend that was eaten by an Ymir-looking titan, clearly before joining the military, and that they are taken-aback by that happening. Normal mindless titans seem to attack and eat the intelligent titans, so their connection isn’t a very well controlled one if anything. Ymir also seems concerned mainly for Krista/Historia’s well-being, and willing to withhold information from Eren to protect her and help Reiner and Bertholdt. There’s something here for sure, but we probably would know just as much if they had all just stared at each other for 22 minutes.

Can’t even punch them.